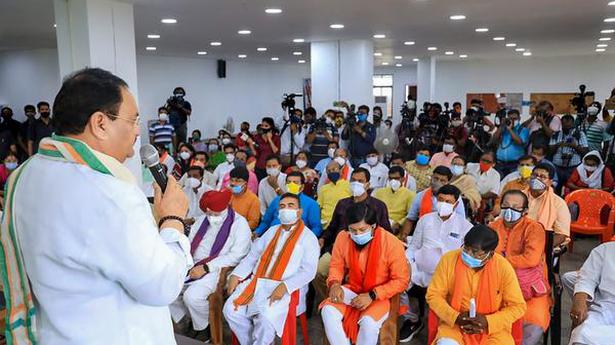 The results of the West Bengal Assembly elections can be seen broadly in two ways. It shows the failure of the Modi-Shah-led Bharatiya Janata Party (BJP) in defeating the Mamata Banerjee-led Trinamool Congress. Yet, the performance of the BJP is remarkable — it has increased its seat share from three in 2016 to 77 in 2021. In some ways, this increase is reminiscent of the BJP’s electoral journey at the national level from two seats in 1984 to 85 seats in 1989, accomplished through the Ayodhya movement. In West Bengal, the BJP has accomplished this task mainly through a polarised campaign in religious terms. From 1989 to 2014, it took nearly 25 years for the BJP to win a single-party majority in the Lok Sabha elections; however, that might not be its experience in West Bengal. In the wake of the decimation of the Left and the Congress, the possibility for the BJP to become West Bengal’s ruling party depends on how the Trinamool is going to govern in a bipolar polity. Make no mistake: the BJP is the only national party that enjoys a special advantage and its hunger to expand is far more acute compared to the Congress’s when the latter had an identical or even better national profile.

A force to reckon with

It is often argued that the BJP was an insignificant force with only two seats in the 1984 parliamentary election. However, what is overlooked is the fact that it received 7.74 % votes in 1984, which is more than the total vote share of the CPI =(M) and the CPI in 2004, which was 7.07%. Interestingly, the Left parties had 53 seats in Parliament with that vote share and played a key role in the United Progressive Alliance-1 regime. This means that the BJP was not as insignificant in 1984 as is portrayed in scholarly literature. Moreover, its vote share could have been greater than what it had received if not for the abnormal nature of the 1984 election, held after the assassination of Prime Minister Indira Gandhi. Nonetheless, the BJP began to build on this limited social base with great sophistication, often with the active support of leaders such as Ms. Banerjee and Farooq Abdullah as National Democratic Alliance partners.

Also read | The limits to polarisation in Bengal

Election strategist Prashant Kishor remarked that a party can at best secure 50%-55% of the votes through polarisation. One is not certain if this is true of all cases and States. Take Gujarat, for example, where polarisation certainly brought in more than 50% of the votes in one election, making it a paradigmatic case of the politics of polarisation in Indian electoral history. Consequently, that has helped the BJP return to power election after election. According to the 2011 Census, the Muslim population is 27% in West Bengal, but in Assam, it is 34.2%. Yet, the BJP was able to defeat the Congress-led Grand Alliance in Assam. It is another matter that former Congressman Himanta Biswa Sarma played a crucial role in scripting the Congress’s defeat, which speaks volumes of the kind of Congress leaders who were once building secular India. Therefore, what has worked for the Trinamool in 2021 may not work forever. This leaves vast opportunity structures for the BJP to expand.

In the present Assembly, the gap in seats between the Trinamool and the BJP is 136. This makes the Mamata government immune to the experiments that the BJP conducted in Madhya Pradesh and Karnataka to capture power. But the long-term future of the BJP partly also depends on how the Trinamool is going to shape itself in the post-Mamata period. If the Trinamool chooses to remain a populist party and becomes a dynasty party, it will become more vulnerable. It could still remain a contender like the Dravida Munnetra Kazhagam in Tamil Nadu or the Samajwadi Party in U.P. But if it chooses to institutionalise and create opportunities for bright leaders like Mahua Moitra, there is a fair chance that the party can have a future beyond Bengal.

Shaikh Mujibur Rehman teaches at Jamia Millia Central University and is the author of the forthcoming book titled, Shikwa- e-Hind: The Political Future of Indian Muslims

COVID-19 vaccination in a village (Representative image: AP) The Union Health Ministry has asked the West Bengal government to investigate instances of…

The Central Bureau of Investigation (CBI) on Monday arrested two senior West Bengal ministers, a legislator and a former Kolkata…

In Its Second Letter to Mamata’s Govt, MHA Directs Bengal to Cooperate with Centre’s Covid-19 Team

The two IMCT teams were reportedly confined to their accommodation since their arrival and not allowed to move outside. The…

Congress, which led India to freedom from British colonial rule, was once the default party of government at home and…

New Delhi, India – On April 29, Amit Jaiswal, a member of the Rashtriya Swayamsevak Sangh (RSS), passed away in…